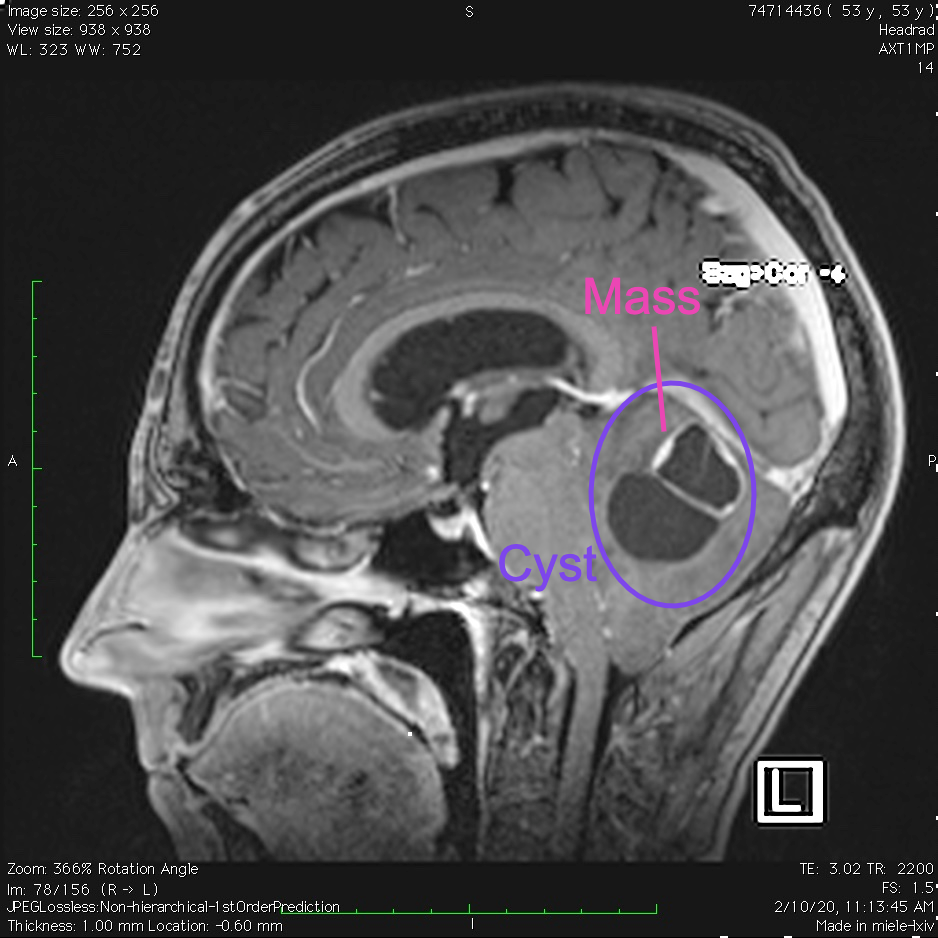 In Mid-November 2019 I started waking up at 2am every morning with headaches. This happened to coincide with the time of year where Bloomington gets really dry in the winter, and so I assumed that these were sinus headaches. These got worse, and I started to have balance problems that I assumed were residual effects of the headaches.

It took me until the end of January to actually get an ENT appointment. The ENT did not think my headaches were sinus-related and ordered an MRI. The MRI revealed a golf-ball sized cyst in my right cerebellum, which was constricting the flow of cerebra-spinal fluid to the 3rd and 4th ventricles of the brain. That pressure was causing my headaches and balance problems.

Four days later I underwent surgery to remove the mass and associated cyst. This procedure is complex but not extreme. Basically the doctor cut a hole in the back of my skull underneath the inion of the head (the baby soft spot) and then cut into the right cerebellum. The mass itself was on the inside wall of the right cerebellum, and creates a large blister (cyst) inside the cerebellum. The cyst is the large dark circle in the left side of the image below (MRI images are left-right reversed), and the mass is the white part at the top of the dark circle.

In general, brain tumors are not good. However, if you are going to have one, this is the type of tumor and location to have. In the image below you can see both the cyst (basically a big blister in the brain caused by the tumor) and the mass itself.

To get the tumor out, the neurosurgeon cuts into the right cerebellum to expose the cyst and the mass. They drain the cyst (the source of the CSF blockage) and cut out enough of the tumor as well as a tiny bit of the healthy tissue. I think of this as removing a wart, because it is mostly sitting on the inside of the cerebellum, not really embedded in the tissue in a deep way.

In general, the surgery removed almost no healthy brain tissue. There of course is trauma and swelling associated with any brain procedure. However, unlike some brain surgery that involves things like the sensory or motor areas, the cerebellum is extremely robust to injury. It readily responds to physical therapy to fix balance problems, which may take several months to resolve.

The image below is a CAT scan taken several days after the surgery. The cyst has almost completely collapsed, and my headaches have not returned. I still have residual balance problems as of a week after surgery, but importantly these are not unilateral, which means that they are due to the fact that I had brain surgery, not the fact that the surgery was done on the right cerebellum.

The pathology revealed that the tumor was benign, and was a relatively rare tumor called a Hemangioblastoma. It only occurs in about 2% of brain tumors and so, in a relative sense, I’m lucky to have it. The surgeon felt like he got a total resection of the tumor, but future MRIs will need to confirm that.

I expect a full recovery once the general effects of brain surgery subside.